As part of a series on the influential, colorful, historic people, places and things along Illinois Route 66, we present The Riviera and the Streetcar/Diner.

Route 66 Association of Illinois Hall of Fame Class of 1993

Here’s the story behind this Route 66 icon: 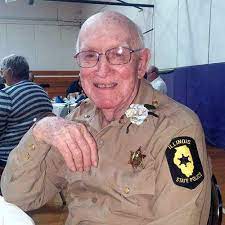 The Illinois State Police was formed in 1922 to serve the people of Illinois on the “new hard roads.” In 1942, District Six headquarters were established on Route 66 near Pontiac. In 1957, fresh out of the police training academy, 26-year-old Chester Henry reported to work there for the first time. From then on until his retirement in 1984, Route 66 was a daily part of his life.

“I was out there on Sundays, I was out there on holidays and I was out there on the graveyard shift,” he said. Frequenting their cafes, gas station and truck stops, he soon became a familiar sight to the citizens of all the little towns from Dwight to McLean. In the early days of radar, he and his partner also became familiar sights to motorists along the route – they set a record one year for the number of tickets written. This made motorists wary when they traveled through District Six, but it also kept the number of accidents well below average.

“Route 66 affected me by the lives of the people that I touched and the accidents that happened and the injuries I’ve seen.” Chester said. “Sometimes the snow would come down and Route 66 would be packed with ruts like an old country road. Accidents would happen, sometimes even fatal ones. I would go home and sometimes not sleep too good for a night or two remembering what I’d seen. The next morning, the sun would come out and the snow would start melting off and you’d wonder if it ever happened.”

“I’ve been there when trucks have turned over and closed the road and we’d have to run traffic both ways on the other side. That’s dangerous practice, but we’d put up cones and direct traffic around them. Sometimes those loaded semis weren’t too easy to move if they were upside down or had both lanes blocked. We had to caution everybody and stop traffic until we could get the road clear.”

In 1967, Chester was promoted to corporal. In 1972, he became a sergeant. And in 1979, he was promoted to lieutenant and became administrative officer for District Six.He held that post until his retirement in 1984, not too many years after Route 66 itself “retired.” During much of his career, his commanding officer was Captain Francis Mowery, who was inducted into the Hall of Fame in 1990.

“A great portion of my life was spent out there amongst the people – out on 66 – helping them and handling different things. We were right out there with them and we were out there all the time. I was glad to be there during those times and I wouldn’t trade it for anything. Route 66 was a grand old. Road.” 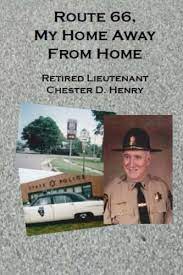 In 1995, Lieutenant Henry began preserving his memories of his time as an officer along Route 66 in written form. In 2014, his book, Route 66, My Home Away From Home, was published.

Friend of Route 66, Chester Henry, passed away at the age of 86 in 2018. His unique and profound experiences along the road remain a cherished piece of Route 66’s history.