As part of a series on the influential, colorful, historic people, places and things along Illinois Route 66, we present The Palms Grill Cafe.

Route 66 Association of Illinois Hall of Fame Class of 2013 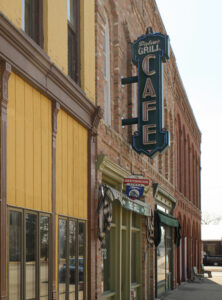 The Palms Grill was opened in 1934 and declared it was, “in the center of Atlanta on U.S. Route 66. Dancing Every Night. Special Chicken and Steak Dinners. We Specialize in Club Parties.”

The original owner, Robert Adams, was a native of Atlanta who had moved to Los Angeles, California. It was decorated to resemble an eatery near where Adams had lived in California. Ray Thompson of Atlanta had been hired to oversee the restaurant and hire and oversee managers for the absent owner.

In its early years, businessmen, tourists, and even celebrities frequented the Palms Grill Cafe. Beginning in 1940, it was also the designated Greyhound bus stop in Atlanta for many years. In the late 1940s and 1950s, the Grill continued to serve as a popular gathering spot, especially for the students of Atlanta High School. Many students held their first real job at the Palms Grill. 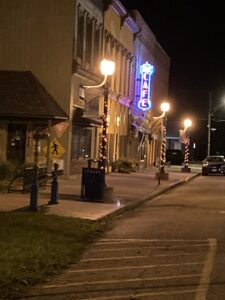 After the Grill closed in the late 1960s, the building remained empty for nearly 20 years. John Hawkins purchased it in 1982, and upon his death in 2002, his family donated the building to the Atlanta Public Library and Museum. In 2003, the Atlanta Library began the restoration project that culminated in the rebirth of the Palms Grill Cafe. 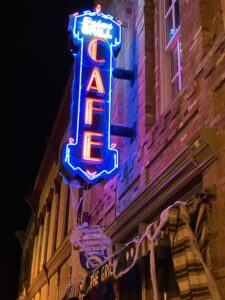 It became a well-known, highly-praised restaurant that beckoned all to stop and dine and go back in time. Blue plate specials, spam sandwiches and definitely the pie attracted tourists to stop and make the Palms Grill Cafe  the center of Atlanta.

Sadly, The Palms Grill Cafe closed in 2020. It is currently owned by the Atlanta Library District and leased out.