Route 66 Association of Illinois Hall of Fame Class of 1991

The Cozy Dog is an original and traditional Route 66 business. Before our association was even formed, its founder and owner, Ed Waldmire, was supporting the road’s revival with displays at the Cozy Dog. His son, Bob, has drawn many scenes and maps of the highway. And Ed is credited with perfecting a classic form of American roadside fast food – the corn dog – on Route 66.

Ed was visiting a brother in Oklahoma in 1941 when he saw the first corn dog being made. “We stopped at a greasy spoon in Muskogee,” Ed said. “They were making it in a contraption like a waffle iron. They poured batter in a trough, put in three wieners and baked it for 15 minutes.”

Toward the end of WWII, Ed was stationed with the Army Air Corps in Amarillo, Texas. With a lot of time on his hands, he began thinking about those corn dogs in Muskogee – and how he could make them faster and in greater quantity. “Finally, I called a fraternity brother in Galesburg who ran a bakery and I asked him to make a batter I could dip a weenie in and deep fry like a doughnut,” he said.

Cooked in a gas-fueled fryer at the base PX, the corn dogs were an immediate success. Soon Ed was ordering hundreds of pounds of the batter mix at a time. After the war, Ed continued perfecting his hotdog on a stick. Cozy Dogs were first sold at the Lake Springfield Beach House; they were introduced at the Illinois State Fair the same year. The first Cozy Dog House was located in Springfield on South Grand between Fifth and Sixth Street. A second Cozy Dog House was located at Ash & MacArthur. In 1949, the Drive-In was born, built along “Route 66” South Sixth Street. In 1996 Cozy Dog moved to its current location, 2935 S 6th St. 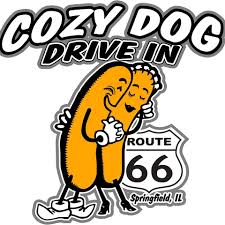 At first, he called his batter-dipped specialty Crusty Curs. But his wife, Virginia, convinced him a more inviting name would help the product sell better. She suggested Snuggle Puppies, Long Johns and finally Cozy Dog. The last one stuck and she drew a logo showing two hot dogs in love. Only Snortin’ Norton on the trucks of Campbell 66 Express and the Fat Man at the Club Cafe in Santa Rosa, New Mexico, rank alongside the Cozy Dog couple as classic logos of Route 66.

Ed’s son, Buz, ran the Cozy Dog at the time of their induction to our Hall of Fame while Ed wholesaled the mix throughout the country. Meanwhile, Ed and Virginia became proprietors of Cardinal Hill Crafts, a unique shop built in an old corn crib near Rochester. They also built their solar-heated home onto the side of the crib.

Their son Bob lived on the grounds in a converted 1966 School bus. A freelance artist, he specialized in Route 66 scenes and maps. He designed our association’s letterhead, T-shirt, bumper sticker,1991 Motor Tour shirt and much more throughout the years. Bob was to become an avid Route 66 preservationist and icon. Sadly, he died of cancer in 2009