Each of us got a key card at the check-in desk, that wouldn’t work. Another set of key  cards, no better. Third’s a charm? YESSS. The third set of keys worked, and for the  first time this entire week, I had a room with Kleenex in it. Journey Joe’s in heaven and  let the sneezes come as they will.

I walked out to where I parked the car and there was a commotion, congregated around  the open trunk of the jellybean sedan parked next door to Angel. A third car was  stopped nearby, with two young men in it. There were three women standing near the  opened trunk, one of them being the hotel desk clerk, all having some sort of conversation. I did not sense any conflict so I went about my business without any interaction, getting stuff out of Angel’s trunk. On my second trip out, only one woman,  the attractive one, was standing by her car, ostensibly talking on her phone. As I got busy collecting stuff out of my car, she interrupted her phone call to engage me. Lyndsay was her name. Her first-pass conversation with me about Angel and how fast  she could go wasn’t anything out of ordinary. But soon enough I detected a motive; let’s  just say that my sixth sense sensed some fishing lines in the pond. Between her increasing coziness, and her friend who was sounding rather annoyed, talking from  inside a motel room through the window screen, Journey Joe was warily assembling another profile. This gal was a professional parasite. She had magnetism and good looks to set the hook, playing on your sympathies. Or foolishness. And she was good  at it.

“You seem guarded. Are you a police officer?” was one question I remember her asking me. When I answered no, she added a little sauce. “How ‘bout let’s go for a ride and show me how fast it can go. I’ll bet you could give us a real thrill!?!”

Then her friend, listening in from behind the screen in the motel room, sort of let the cat out of the bag. “You going with him, right? You can’t stay here!!” came the annoyed voice out of motel room 130, next to my room 128. There was a bit of hopefulness in that tone.

Followed by a “You got me if you want me, Honey” look from Ms. Lyndsay.

“BEEN THERE, DONE THAT!” exclaimed Journey Joe, in my head in that immediate split-second. “Remember that guy we took for a ride in Naperville? Remember how close you were to getting carjacked? Don’t try to be lucky twice! This chick is trouble, her friend don’t even want her around!” I took JJ’s advice, and replied.

“Darlin,” I said in reply, “We can’t just go out on that freeway and floor it. That’s how we end up in handcuffs. Thanks for asking but I been driving all day and this old guy is kind of tired out.”

Handcuffs are stuck in my memory.

“How ‘bout in the morning then?” she persisted. “Tomorrow?” I’ll look for you.”

“Okay, we’ll see tomorrow.” I pretended to get busy in the trunk, but kept observing.

I laughed inwardly at the image that popped into my head. Me, Ms. Cuff whom we encountered on Thursday morning, with a handcuff attached to her wrist, and Ms. Lyndsay Parasite, all three of us handcuffed together and prancing around one of those  old telephone poles on Route 66. Imagine.

Journey Joe didn’t bother to tap me on the shoulder. This time, he slapped me upside  the head. “WALK. AWAY. NOW!” No need to ask twice. I wished Ms. Lyndsay Parasite blessings and good luck. I parted company with the flirty thirty and did not walk out of my motel room for the rest of the night.

But I did peek out the window. The commotion continued. The car with two men  stopped by and dropped off a six pack of beer, then left. “That tells ya somethin,’ don’t  it? The young men won’t even stick around!” said Journey Joe. After dark, the  commotion between Ms. Lyndsay and the other gal in the motel room gradually morphed into confrontation, through the wall in the room next door, and in the hallway.  In my half sleep, I heard “I’m never gonna help you again!!!” and “Leave me alone.  Please!”

I got a text message from Lulu next door. In room 126, and insulated from the action by the physical space of my motel room, she had no idea what was going on. “What time  do you want to get on the road tomorrow?” I texted in reply, “Before the chick in the next room wakes up!” Hah, I bet Lulu wondered “What’s that all about?”

The fracas either died down around midnight, or I just fell asleep anyway. So no longer can I say “You don’t get this at the bigbox on the interstate!” Now can I. Because we’re  in a bigbox and the interchange is right outside the parking lot.

Follow along with Journey Joe’s travels! Click to read the following entries in this series as they’re published. 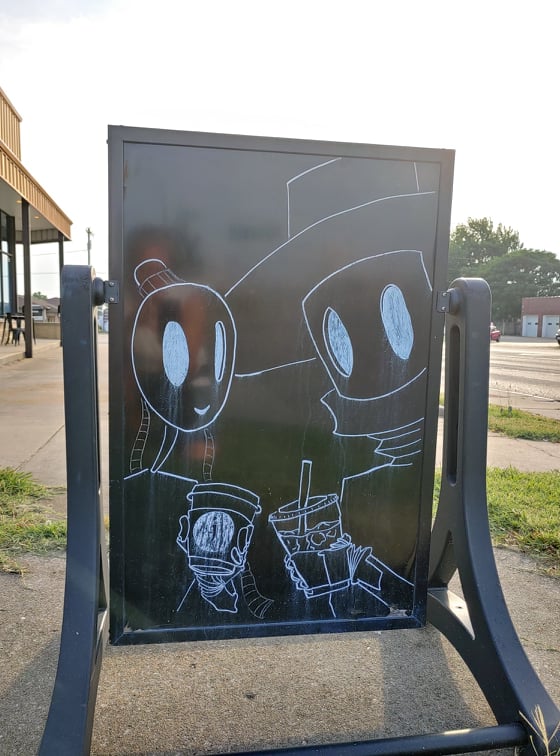