Sit back and enjoy a Journey Joe travel adventure. Is Journey Joe a real person? Well, not really. But he’s as real as any nickname, any stage personality, any thought or collection of travel experiences that any roadie might have. The real “Joe” is Joe Razumich, a lover of cars and the open road ever since his childhood, growing up around the corner from a hot rod shop, a busy Broadway, and a railroad track. But really all Real Joe does is drive. And put gas in the tank. And put Mr. Suitcase, Mr. Duffle Bag, Ms. Cooler, Mr. Road Atlas, etc., collectively known as the “Inanimate Objects,” in the trunk or behind the passenger seat. Or, to put it another way, Joe loves to drive. Journey Joe loves to write about it – and take you, Dear Reader, along for the ride.

This bed and breakfast I picked out for myself is a slice of heaven. Now don’t get me wrong, I love the vintage motor courts and tourist cabins; they have a charm all their own. But it doesn’t take many nights sleeping in a 150 square foot room, to start longing for a bit more space. And as if that wasn’t enough added splendor, there were fresh bananas in the kitchen. And juicy red apples. Yum. I tried some samples before heading out on The Walk.

Lebanon is big. It would take a dedicated effort to see all of what’s available here on Route 66 with a walk, but I managed to take in four blocks worth on a trek from the Manor House to their partner restaurant, the East Elm Eatery. With little to no traffic yet on Mother Road at 7:00 am, I can hear the peculiar rush-whine of the interstate, just out of sight somewhere as I walk along. The street is clean. No weeds in the sidewalks. No abandoned ruins. A nice Visitor Center with some interesting artwork that no one would notice unless walking. A piece of Route 66 with identity and self respect. 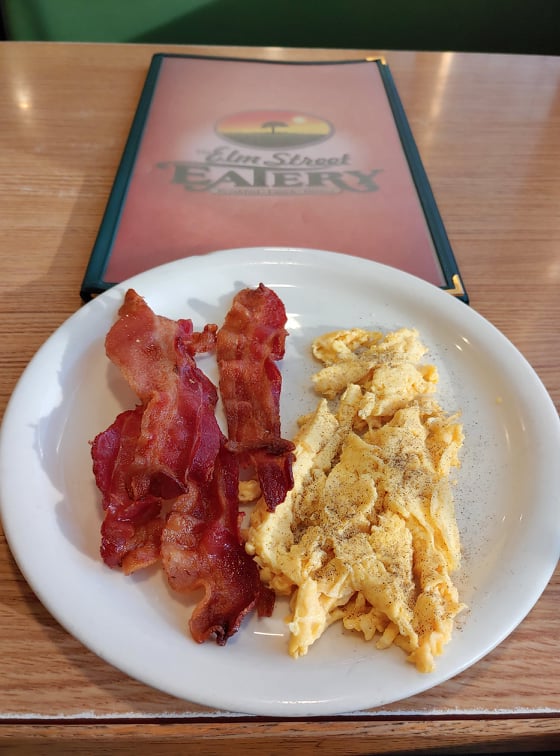 Typical to Journey Joe’s luck of timing, I got myself seated right away and then watched the line grow quickly from the reception post to the door and beyond. I followed the advice of the nutritionist I sought out while in Florida suffering from repeated fatigue. She said, “Eat a dozen eggs and a pound of bacon if you want, but skip the potatoes and the toast.” So I ordered only bacon, eggs, and tea. Makes for a rather spartan picture, but I can say that it served its purpose.

By the time I finished breakfast, nearly every person seated had some kind of Route 66 logo on their person. Build it right, and they will come. I said hello to a few folks who recognized me – which of course is embarrassing at first because I have no aptitude for remembering names or faces. Their friendly greetings made me feel the welcome of the Prodigal Son.

It was time to walk back to Manor House and get ready for the parade. All of the literature I could find, said to line up at 10:00 and parade at 11:00. But nowhere that I looked had any information on where the parade started. But knowing car people, I figured they’d line up early and I’d be able to find the starting point if I just drove up and down old Route 66 for a few miles at 9:00. Sure enough, just east of the Munger Moss Motel, there were about 50 cars lined up already. So I hurried back to base, grabbed everything I’d need for the parade and afterward, and headed on out.

Holy moley was it warm already by 9:15 am. Driving back to the starting point, top down with the A/C on, I got behind the massive Cadillac hearse, with its vintage 1950 engine exhausting enough carbon monoxide to make me its next occupant. So I zipped around past Behemoth, who blew his horn at me. That nearly scared me out of my bucket seat. It’s a train horn!

Heading over to get in line, usually it’s customary to go to the end of the line. But if I did that, I’d be behind that Behemoth and his train horn. Luckily, I saw the white Skylark convertible and its humans, whom I befriended last evening at the town cruise-in.

“Hey, buddy”, I opened, “I need a random act of kindness from you. That big-ass hearse is behind me. He’s got a train horn and I do not want to be in front of him. And his exhaust stinks so I don’t want to be in back of him. Could you move up and let me slip in behind you?” Mr. Skylark agreed and moved up enough for me to squeeze in. I shoehorned myself and Angel in between Skylark and Big Yellow Ford Truck. And on the grassy spot next to my parking space, was a spot of shade. Worth its weight in gold today, my friends.

Next came my only disappointing moment of this whole trip. I walked over to a gorgeous 1966 Chevrolet Impala SS, to compliment the owner on his prize. His buddy was standing nearby and had this comment: “Ya don’t sees may white people drivin; one uh these heres.” I looked at him, an old white guy expecting everyone here to share his attitude. I decided to speak up instead of being quiet, this time. “What’s ‘white’ got to do with anything?” I asked him. “Everthang!” said the old buzzard. I just shook my head, turned around and walked away. What good would it do to argue or trade insults? 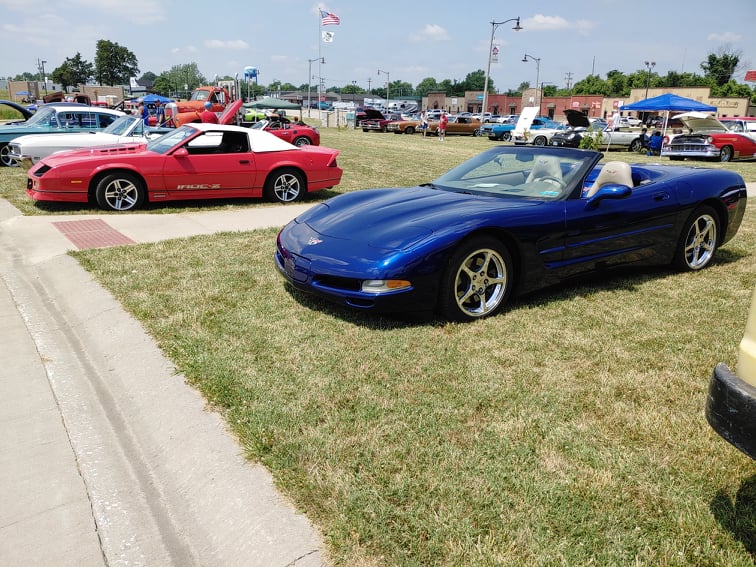 Surprise surprise, the parade started at 10:00. An hour earlier than I thought. Good thing I showed up early. Off we went, rubberbanding down the Route, past the Munger Motel and the few souls brave enough to take the Missouri heat to see the classic cars. In ten mercifully short minutes of hot, slow driving, we were finding our parking spaces on the grass at the downtown park.

At the park, it was hot, hot, hot. How could I have forgotten my ice pack and towel. I walked around for a couple hours, looked at the cars, talked to their owners. It was a pleasant time. A bit past noon, I succumbed to the ice cream temptation. Sitting up on the hill, at a picnic bench in the shade, listening to the greatest hits of the 1950’s, life was a breeze. An hour after the ice cream, the sugar crash came. Sweating and droopy eyed, I headed back to Manor House and was fast asleep five minutes after I laid down. Sweet dreams…

The big party for the weekend, the 75th anniversary celebration of the Munger Moss Motel, started at 4:00 pm. I showed up there, fresh from my nap, ready to mingle and meet. I had so much fun meeting people, previous and new friends, that I forgot to eat. A highlight: I finally got to meet Ms. Chance, the Belle from Baxter Springs – which I was very much looking forward to. And another fascinating deja vu … it turns out that I had previously met Kristy, three years ago during a motor tour encounter at the Ribbon Road. Au Revoir, Kristy, you made my day today. 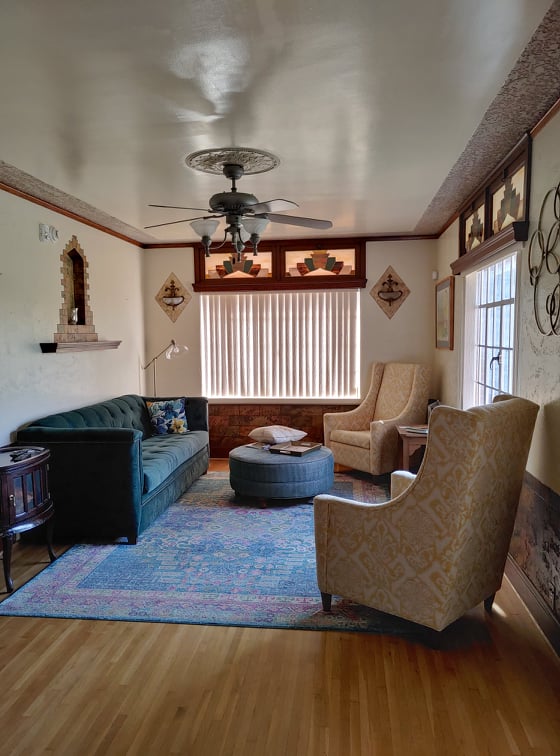 They rolled up the sidewalks and folded the chairs around 8:30 and I made my way back to my Manor House, with it’s refreshing air conditioned spaces and delightful sitting rooms. But it had cooled off somewhat so I sat up on the balcony for awhile, just thinking to myself how good life has been and continues to be. I pray only that I’m doing enough good in my world to earn this gift.