Route 66 Association of Illinois Hall of Fame Class of 2009 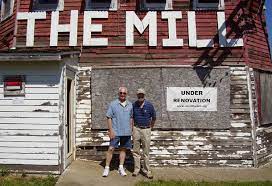 The Mill is a historic structure on Route 66 in Lincoln. It has been officially saved from demolition and is on the way to complete restoration. The Mill, which is designed like a Dutch Mill, originally opened as the Blue Mill in 1929. It was a sandwich stand and a bustling section of the 1930-1940 section of Route4/Route 66 where many gas stations and businesses were located. Later in the post-WWII era, the Mill became a restaurant/bar and was famous for schnitzel sandwiches. Additions were added to the back of the original building.

The Mill Restaurant closed to the public in 1996 and stood deteriorating for many years. The Mill was sold for taxes, but the new owner could not afford to demolish it. In 2006, the future of The Mill took a positive turn. Geoff Ladd, then Logan County Tourism Director, stepped up along with Ernie Edwards to save the historic structure. The Route 66 Heritage Foundation was created, and the “Save the Mill” era was born. The Route 66 Heritage Foundation bought the iconic Route 66 building for $10.00 and began restoring it. Geoff was dedicated to keeping the dream alive in renovating the once restaurant into a museum. He gathered many volunteers who donated their time and specialties to preserve the 1929 structure. Grants and in-kind donations were also given by many preservation organizations. Over the next 11 years, the hard work of dedicated people made the legacy of The Mill continue!

From 2006 to 2017, The Route 66 Heritage Foundation, Route 66 organizations and a number of volunteers helped bring The Mill back to life! The outside was repainted, windmills were restored, windows were replaced, a new roof was installed, and the inside was restored using original pieces (wood flooring, light fixtures, bar). However, the back addition and kitchen could not be restored and had to be torn down.The restoration efforts of this Route 66 and its iconic status were recognized by The Route 66 Association of Illinois in 2009 when it was inducted into our Hall of Fame. The hard work of the dedicated Route 66 community made it possible for The Mill to officially open as ‘The Mill Museum on Route 66″ in 2017!

On April 29th, 2017, The Mill was open again! However, this time as a Route 66 museum, The Mill Museum on 66. The museum not only features original artifacts from The Mill Restaurant, but also from The Pig Hip Restaurant/Museum and The Tropics Restaurant. The Pig Hip and The Tropics were staple places along Route 66. The Mill Museum on 66 has operated as a museum since 2017, however more restoration and preservation continues to the present! Be sure to stay tuned to see the new preservation efforts!

In February of 2020, the Route 66 Heritage Foundation of Logan County transferred ownership of The Mill Museum on 66 to the Logan County Tourism Bureau. After obtaining ownership the Bureau realized that some repairs were needed on the interior and exterior of the building. The Logan County Tourism Board gave the approval to re-side the entire building, install heating/air and gutters, and do interior updates. We are so grateful to help further preserve this iconic Route 66 structure. The museum features original artifacts from TheMill, The Tropics, and The Pig Hip (3 Route 66 restaurants that were iconic fixtures in Logan County), along with some other Route 66 artifacts.The Tourism Bureau could not have done it alone, thank you to the City of Lincoln, Route 66 Association, and the many contractors who have helped keep the integrity of this historical building. With this restoration, the Bureau is further preserving this iconic, original building in anticipation for the 2026 Route 66 Centennial and beyond.

As of this writing, The Mill on “66 in Lincoln is raising money to install heating and air conditioning so it can be enjoyed year ’round by tourists.