Route 66 Association of Illinois Hall of Fame Class of 1998 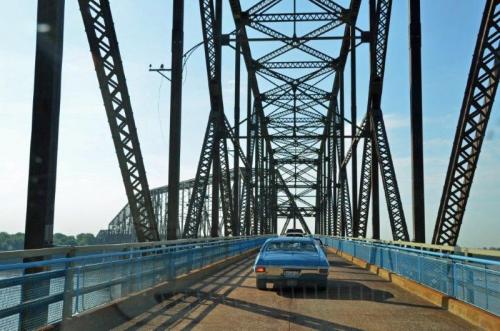 The Chain of Rocks Bridge is Route 66’s best known bridge, an alluring and enduring symbol of the open road. Its name is derived from 17-mile part of the Mississippi River that contains a series of rocky ledges, dangerous to river navigation. The bridge, just over one mile long, was privately built in 1929 as a toll bridge for $2 million. It boasts two distinctive features: The first, a 24-degree turn in the middle that was engineered to quell protests from riverboat captains complaining about the treacherous conditions navigating the bridge’s massive concrete piers and water intake towers. The other feature, two ornately-styled pumping stations…one for Missouri River water and one for Mississippi River water.

Low income put Chain of Rocks into receivership, but it was rescued in 1935 when highway officials routed US 66 over it. It carried the Mother Road’s traffic for 30 years. But when a free interstate bridge was opened just north of it in 1966, The Chain of Rocks quickly declined. With maintenance costs far exceeding tolls, the City of Madison, its owner since 1939, closed the bridge in 1970. For many years, the only people who crossed it were adventurous trespassers. 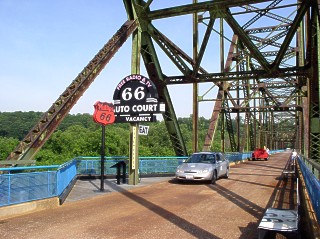 New life came to the aging landmark in 1997 when it was leased by Trailnet, a not-for-profit organization that maintains a series of  recreational trails in Illinois and Missouri. Trailnet immediately embarked on an ambitious and successful program to repair the bridge and its surface. As a result, the bridge reopened to pedestrian and bicycle traffic in September 1998. In June of that same year, a wedding was even scheduled to take place at the turn in the bridge. Romance lives on Old 66!

In subsequent years, the Chain of Rocks Bridge has been cared for by Great Rivers Greenway, an organizations that preserves underdeveloped land for recreational use or environmental protection. Repairs to the Missouri side parking area are currently in the planning stages. The bridge is open to vehicle traffic only by permit, which is exactly what we’ve acquired to make possible a rare double crossing of the Chain of Rocks Bridge to kick off our 30th annual Motor Tour on Saturday morning, June 12, 2021.