Thirty one years ago on November 9, 1989, a handful of spirited roadies/Route 66 enthusiasts made it official: They signed the paperwork to establish The Route 66 Association of Illinois as a non-profit organization with the State. 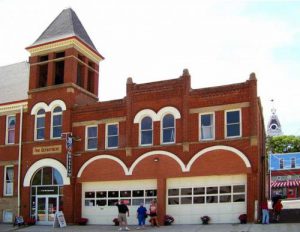 We were a small but enthusiastic group of 10, dedicated then, as we are now, to preserve, educate, promote and enjoy our segment of the Mother Road here in Illinois. At the time, we didn’t even have an official “home” to speak of. Meetings were held in Dwight, Illinois; our museum, such as it was, consisted of several displays at what was then the Dixie Truck Stop in Mclean, Illinois. And so the association continued, growing in membership year by year.

By 2003, we were outgrowing our modest accommodations at the Dixie. It was arranged with the town of Pontiac, IL to set up shop in their old fire station, which still today serves as our museum and hall of fame.

Read more about our association’s history.

Stop in for a visit in Pontiac, Illinois – our museum’s open every day!

Route 66 had its official beginnings 94 years ago in 1926 when the Bureau of Public Roads launched the nation’s first Federal highway system. Like other highways in the system, the path of Route 66 was a cobbling together of existing local, State, and national roads. The highway quickly became a popular route, promoted as “the shortest, best and most scenic route from Chicago through St. Louis to Los Angeles.

And so it all began…