This past weekend was the Mother Road Car Show in Springfield, Illinois. I spent two days in the 92 degree heat with Board Members Marty Blitstein and John Lucchesi. We talked Route 66 with actual travelers who stopped at our booth on their way west, spoke with dreamers who talked about how someday they will travel, and others who just love the road and everything about it.

Even Governor Bruce Rauner rode his motorcycle on Route 66 Saturday in the heat, stopping to visit some of the 66 communities and ending at the Illinois Scenic Byway sponsored Travel and Leisure Expo on Washington Street. Not only did “Bruce” take the time to sign the Event car hood, he stopped to speak to all manning the tents and booths and shook our hands, thanking us for being there and all we do for the 66 community. In a world where so much is going on and you worry about whether or not the Route 66 community is being heard, it gave me hope. Hope that we can keep our vision of having Route 66 a national trail so when the old timers who were present at the festival are long gone, the two lane will be honored and remembered as she should be.

Route 66 is very much an issue on the local (Illinois) scene as well as the national. There is renewed energy about preserving the road and acknowledgement that we have National treasures in each state that need to be attended to. I have been outspoken about my biggest fear that Route 66 becomes a money based 2600+ mile “Branson on steroids.” This past weekend I was able to talk with many of the people and community members who are working hard to make sure that our 66 history – service businesses, mining, farming, etc. is not lost to time. I spent time with a family traveling the road from Australia that had an autistic child that was having an amazing time and according to his parents was being more expressive than usual because everything they watched on video was just as it appeared. Even the intense heat he found fascinating. We learn something from everyone we meet on the highway.

Our Association is having their annual elections on Sunday, October 15th, at the Pontiac City Hall Annex, 115 W. Howard Street, in Pontiac. The Board meeting is at 10 a.m. and we break at Noon for lunch. The General Session/elections Starts at 1 p.m. This year the positions up for election are President, Recording Secretary, the Corresponding Secretary, plus the county representatives from Cook County, Grundy County, Logan County, Madison County, Sangamon County, St. Clair County, Will County, and one at large position. We hold four meetings a year – one in January, one in April, one in July, and one in October. We ask board members to keep our group aware of what is happening in their County, to watch to make sure the road signs are where they should be, and to donate at least two Saturdays a year at our museum in Pontiac. All board members are asked to participate in the planning of the annual Motor Tour. If you’ve always wanted to get involved, now is the time.

We, as a group, have discussed ending the tours in 2019 – because after 28 years the tours are are harder to plan as the economy tightens and people and communities have less to share. Volunteers are the heart of our group and of the communities we represent.

So this winter when you’re cleaning the house and garage, finding those treasures you bought at sales along the road, keep in mind that starting in April, Litchfield will continue to have their 2nd Sunday Market – selling anything from 1980 and before. Bloomington has their 3rd Sunday at the Interstate Center. The Red Carpet Corridor is the first full weekend in May – the 2018 date is May 5th and 6th. The 29th Annual Motor Tour will be June 8th, 9th, and 10th! July brings local festivals and events all over the state! It’s time to plan a little time out now for the coming year – to see all the new exciting things that will be happening along our Illinois miles.

Our Illinois greens are giving way to the golds and reds of fall. Time for holidays and school events and family celebrations. In the real busyness of every day life, take time to reflect and think of your own history. Share this with your family. Put down the cell phones, the tablets, the cable/DVR will hold whatever is so important for a while so you can share and talk. 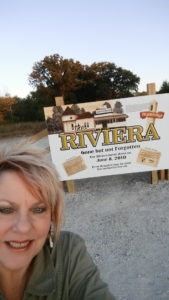 Someone in Springfield asked me what one man could do for the Association. I told them about how Tom Perkins and John Weiss were working on a memorial to the late, great, Riviera restaurant in Gardner. I explained how the men worked on setting it up, changed things, tried to find the best way to have some kind of marker for a place that had been a manmade entertainment center. It originally had a rock garden, at one time a petting zoo. It consisted of an old church and a house – and it flooded so many times – but it came back and served the people time after time. One day John Weiss was there when they delivered a couple tons of gravel – crushed rock – to be distributed around the new sign. John Weiss didn’t leave the stone mound there. He distributed it shovel full by shovel full until it was done. John could have called up the Preservation Committee and asked for help but it was something he felt he could do. A tribute to the Krafts, Peg and Bob, and the stories and service they provided for years at the Riviera. I’ve used the photo of me at the new sign, my first ever “selfie” to show our new attraction. Kudos to Tom Perkins, John Weiss, and the artwork of the “Con Man” for their hard work.

We are blessed for having people all up and down the road working – Dave Tucker in Gillespie working on the Mining Museum, Nelson Gorman in Mt. Olive working on multiple museums, the late Sam Reichert Jr. for his “Just Off 66.” We had the priviledge of working with the owners of DeCamp Junction, Loren Kovaly and his partners who just sold DeCamp. Loren brought water in not only to DeCamp to save it but provided water access to his neighbor as well. In this Loren made sure that DeCamp was not another historic building lost to time…another empty building on the side of the road.

I understand that every time you try to thank someone it seems like you forgot someone else and there are hurt feelings. There are just so many people to thank over the course of years I have been President that I would have a double issue of just “thank yous.” I have learned perseverance, patience, how to lose with grace, how to compromise, and how to help history speak. Money is a great help, but volunteering is priceless. Thank you to everyone who ever gave me a minute, an hour, or years of service. Thank you to the city of Pontiac for their can-do spirit. Thanks to Bill Kelly and Geoff Ladd for their making the Scenic Byway in Illinois a positive force in our communities. Thank you to Martha Jackson in Litchfield who proves you can do anything you set your mind to – and the Route 66 Welcoming Center and Museum in Litchfield is proof of that. I have learned so much and have so much more to learn and do.

Before the snow flies, get that last piece of pie at the Palms Café. Enjoy the Chicken at the Old Family 66 Restaurant in Dwight. Time to sing karaoke at The Luna in Mitchell. Don’t forget our newest Illinois museum, the Mill. Only took 13+ years to open but I do believe the 66 spirit is patient.

Enjoy the fall, and thank you all for your support of the Illinois Route 66.