On July 25, 1929, The Mill officially opened as The Blue Mill, and was painted white with blue trim. The original owner, Paul Coddington, opened the iconic building as a sandwich stand. On opening day, the children of the manager dressed up in Dutch outfits and handed out roses to all who visited. Eighty-eight years later, The Mill on 66 is enjoying its first year in operation as a restored historic structure and a Route 66 museum. The mill offered extended hours on Tuesday, July 25, 2017, so that visitors could stop by and wish The Mill a Happy Birthday. 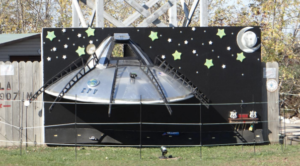 Making a one-time appearance in Lincoln that day at The Mill was an Earth Patrol Route 66 Spaceship, the USS 66 EPV Earth Patrol Vehicle, designed and built by David Bentley. Bentley is the creator of the Railsplitter Covered Wagon, which holds The Guinness World Record as the World’s Largest Covered Wagon, and was named as a top Roadside Attraction by Reader’s Digest Magazine. “In 2007, as director of the Abraham Lincoln Tourism Bureau of Logan County, I worked with David Bentley to relocate the World’s Largest Covered Wagon to Lincoln from Divernon. Local philanthropist, Larry Van Bibber, came up with the funds to purchase and move the wagon to its new permanent home in the city. It was an honor to be a part of bringing the wagon here,” said Geoff Ladd, who is now the assistant director of the Illinois Route 66 Scenic Byway. “I am pleased that David is brought  his Route 66 spaceship attraction to The Mill for our special birthday celebration.” The USS 66 EPV (Earth Patrol Vehicle) Route 66 Spaceship is a large interactive traveling display that was set up at The Mill that day. A special face cutout gave kids and adults the opportunity to have a picture with their smiling face in the control room of the ship. Mr. Bentley was on hand for his first-ever public appearance in Lincoln, and signed World’s Largest Covered Wagon postcards that day as well.

The public was also able to meet many of the volunteers who worked on The Mill over the last eleven years. Free water and candy were served. “This was a great meet-and-greet, as well as an opportunity to see the impressive museum collection, that includes rare artifacts from The Mill, The Pig Hip Restaurant, The Tropics Restaurant and ‘Illy’, the Illico Gas Station robot,” said Ladd. “We have artifacts going back to opening day in 1929.” The gift shop was also open extended hours, featuring unique Mill gift items.

A suggested 88th birthday Tax-Deductible donation for The Mill of any amount is appreciated to help defray monthly expenses and insurance costs. The non-profit group that runs the facility, The Route 66 Heritage Foundation of Logan County, is a 501c3 tax-deductible organization. For more information, contact Geoff Ladd at 217-671-3790.