In the Fall, 2016 issue of our members-only newsletter, The 66 News, Recording Secretary, Emmy Bates posed the question: “Why Did You Join the Route 66 Association of Illinois?”

Well, Tim Masten of Knoxville, Tennessee answered Emmy’s question and we want to share what he had to say:

I applaud all of the hard work the many volunteers have put in to help preserve and promote Route 66 in Illinois! You’ve come a long way baby!

As for me, there are many reasons why I joined the Route 66 Association of Illinois back in 1991. One reason was because I had a 1966 car and it was the 25th anniversary of the car along with living near and driving on Route 66 for many years. I actually got that car from a guy in Dwight. There are many memories permanently embedded while traveling on the road as many of those times the travel was during vacation or summer school break to get to a destination to relax and enjoy. 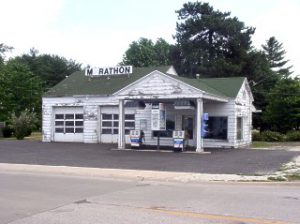 I remember living in Kansas and going to Michigan with my parents by way of Route 66 while listening to WLS or a Chicago baseball game along the way. Occasionally we would stop in Dwight at a restaurant and the Ambler/Becker station for gas but was saddened when observing the breaking up of the pavement in some areas of Route 66 when I55 was finished. One memory was back in 1996, I had a transmission breakdown with my car and the Ambler/Becker people got it going again.

Also, because of living in Carlinville, Chatham and then Bloomington for many years has enhanced my fascination of the iconic route. And one time I even got a ticket from Chester Henry very close to the Route 66 “chicken coup” close to Pontiac. One of my all time favorite movies is the “Cars” movie by Disney as they hit it masterfully with many themes of the ol’ mother road.

When I joined I remember seeing my name in the association quarterly as a new member and also mentioned in that same edition was Bobby Troup, yes THE Bobby Troup who wrote “Route 66” song. Time though has passed quickly and it’s hard to believe that I’ve been a proud member of the Route 66 Association of Illinois all these years and enjoy reading “The 66 News” and the mystique of the road even though I now live in Tennessee since 1998. I still have that same 1966 car to enjoy on any road with Route 66 in the windmills of my mind!

We thank Tim sincerely for sharing his memories of Route 66 in Illinois and for remaining with us as a member all these many years!

Why did you join the Route 66 Association of Illinois?

Send your story to Editor Gina at: Gina@WriteyTidy.com