Each year, the Route 66 Association of Illinois recognizes a handful of “people and places along Route 66 whose blend of hardy individualism and grassroots community spirit gave the road such special character.” Nominations for Hall of Fame candidates are accepted from anyone year- round; the deadline for each upcoming year’s consideration being December 31 of the current year.

This year’s group of Route 66 Association of Illinois Hall of Fame inductees were honored in a ceremony held on June 10 in Lincoln, Illinois; they were: 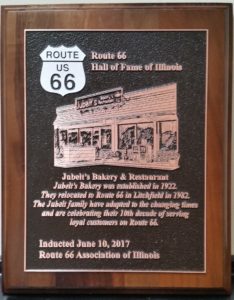 In May of 1922, three brothers, Paul, Fred, and Albert Jubelt bought an existing bakery in the coal mining community of Mount Olive, Illinois. Bread was by far the most important product of the bakery. The brothers worked hard and were successful. In 1929, Albert died and Fred opened a second bakery in Granite City. In 1935, the partnership dissolved and Paul continued to operate the Mt. Olive location himself.

As more highways were built in the 1930s, competition from national bread companies increased. A house to house route was started with great success but World War II and shortages of material and manpower ended this effort. In 1950, with the general decline in coal mining in the area, Jubelt’s expanded with another store in Taylorville, Illinois. Another store opened in downtown Litchfield in 1952. Over the next 40 years, more stores were opened in Jerseyville, Lincoln, Carlinville, Staunton, Gillespie, and Springfield. In order to meet customer demand, the family again changed direction, adding prepackaged vending-type sandwiches in the Litchfield store. After some sessions in the test kitchen at Bunn Capital, lunches offering freshly made sandwiches, salads, and soups were available in all their stores.

As the businesses in Litchfield began to shift to the west side of town, the family needed to find a bigger place with parking. When the Burger Chef building on Route 66 became available, the family decided to open the current restaurant there in 1982. The economy once again changed and the family independent bakery became a dying breed. The family began closing the stores. The decision to keep only the Litchfield store open was made and in January 2008, Jeanmarie Jubelt purchased the business – this was the 86th year of Jubelt’s being in business. Over the last 90+ years, Jubelt’s has changed direction many times in order to adjust to the changing times and lifestyles. With the help of loyal customers and travelers from around the world Jubelt’s Bakery and Restaurant is now in their 10th decade. Hand-dipped milk shakes are still served with a smile! 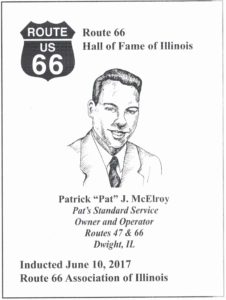 Pat’s first job was pumping gas at Hauck Oil in Wilmington on Route 66. He then moved on to work at Caterpillar in Aurora, Illinois, but found his heart wasn’t in it as much as his gas station. In 1965, Pat leased McElroy’s Standard Station at the intersection of Route 53 and 129 (Route 66 and Alternate 66) in Gardner, Illinois. He quit his job at Caterpillar and also leased Pat’s Standard Service at the intersection of the stop lights on Route 47 and Route 66 in May 1968. After a couple of years leasing the two stations, he decided to give his full time commitment to Pat’s Standard Service which was open 24 hours a day.

Pat truly had a passion for creating a full service Standard Station. His four tow trucks each had a name: Big Hank, Ol Yeller, Little Blue I and Little Blue II. With his line of tow trucks, Pat was ready to tow whatever needed towing. The station’s repair department also had an excellent reputation. Pat’s consideration and kindness resulted in him winning numerous awards for outstanding service. The station was certainly popular, as it pumped 1,000,000 gallons of gas in 12 consecutive months during the years of 1968 and 1969!

Pat was involved in his community, working with Dwight High School and RR Donnelley executives to provide work study opportunities for students and incentives for employees.

At times, unfortunately, cars would end up in a body of water. As a result of Pat’s dedication and caring, he completed a course in scuba diving, becoming a Certified Diver so he could assist with rescue efforts in these situations. After completing this course with a State Trooper, together they made a film called, “How to Save a Victim from a Submerged Vehicle” at the South Wilmington Firemen’s Beach and Park Club.

Pat realized his station made many service calls to semis dealing with flat tires and tires that needed to be replaced. In response to this need, Pat started a “Tire Bank” which stored a variety of semi tires provided by truck companies. Having replacement tires available on site saved truckers a lot of wait time.

Every day was an adventure for Pat. He told his employees would be working with three different types of customers during their shift: “asktomers” – asking for directions, shistomers – stopping to use the restrooms, and “customers” – needing gas pumped, oil changed, tires checked, windshields washed, vehicle towed, etc. Pat also told his workers: “All of our customers bring us joy – some by coming, and some by going.”

Pat’s station was opened during the hippy era; he enjoyed visiting and providing service to hippies. Sometimes he did not follow the motto: No Shoes, No Shirt, No Service.

Observing the new Interstate 55 was coming, Pat saw a need for a new truck stop. He had plans in process but unfortunately a heart attack took his life on December 19, 1976.

His business sense, his sense of community, his foresight and his strong work ethic made this man worthy of the Hall of Fame nomination. 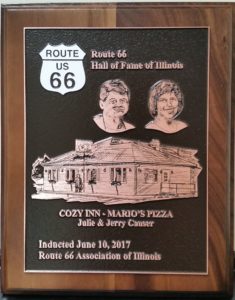 The Cozy Inn and Mario’s Pizza was nominated to the hall of fame because of the people who have made this location a town favorite and for the decades of service they’ve provided to to travelers.

In the early years as the Cozy Inn, the business also served as one of the important local Sante Fe bus stops. Those bus travelers were particularly challenging groups for the restaurant to take care of, as they were on a very tight schedule. When busses arrived, orders would be prepared and filled quickly, often while customers used the bathroom. Other travelers liked to eat at the cafes that were also bus stops because families knew you could get good food quickly. At the Cozy Inn, a man could also catch a beer and that was very important to many men in the 1930’s and 1940s. Ice cream was also a draw to the kids riding in the back seat of their fathers’ sedans.

In 1933 and 1934, the Chicago World’s Fair was a terrific boon to Illinois and to cafes and restaurants that were along the main routes to Chicago. Julie’s grandmother and great grandmother both worked at the Cozy Inn and Julie grew up just two houses off the route.

As the route was moved over, the restaurant continued to serve the locals. The building that housed the Cozy Inn became a liquor store and bar and then was purchased and turned into a second pizza restaurant by Vincenzo Evola.

When Vince moved on, Mario and Linda Todino purchased the restaurant in 1975. Mario’s Pizza has been at this location on Historic Route 66 for over 40 years! The entire interior of the building has been transformed into a historical gallery about the building, the family businesses, Historic Route 66 and Bob Waldmire and his art. Julie started working at Mario’s when she babysat for the Todino’s family; she later became involved in the restaurant. Julie has been joined later by her husband Jerry, her own family and a loyal group of employees over the years.

Julie and Jerry Causer have been the mainstays of this business for three and four decades. As a local institution for good food, their restaurant is busy. Route 66 brings a new influx of popularity and visitors from all over the world.

No one leaves hungry or without meeting a new friend!

View the complete list of those inducted to our Association’s Hall of Fame.