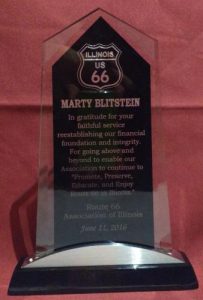 The following was the presentation by Duke Cartwright to Marty Blitstein presenting him with one of the President’s Awards 2016.

October 18, 1998, Bloomington, Illinois, The Country Buffet Restaurant for the Quarterly Route 66 Association of Illinois meeting and elections. Marty became the newly elected Treasurer. We (the Association) was flat broke. Not enough money in the bank to send out letters to the membership that we were in trouble and in need of help. I stood up and made a suggestion that we “pass the hat” around for donations to get enough money for postage to send out letters to the membership. We received almost $500 which was enough for postage.

With that Marty started his campaign for the Route 66 Association of Illinois and has been campaigning ever since. For the next 18 years, he has been influentially involved in everything that has to do with Illinois Route 66. Probably the biggest thing would be the relocation of the Hall of Fame from McLean to Pontiac.

The purchasing of the glass display cabinets to show off the artifacts of Route 66. The ordering, and selling of the t-shirts, jackets, patches, cookbooks, and other items we make a profit on. The yearly tour. He shops for the best location for the banquet, menu for the food, every detail involved including the silverware that we eat with and the napkins we wipe our mouths with, he negotiates for. Marty KNOWS the business and how to get things done.

He orders the materials used for the Tour (window stickers, dash plaques, license plates, sends out the letters announcing the tour, etc.) every year. He records and tabulates the participation of the Tour process. Posts the monies in the bank and records in the books so that people like me can understand where the money comes from and how it is used. Throughout the tour, at all stops he is there to handle our membership and make certain that all goes according to plan.

Marty is a “super salesman.” He loves what he does and enjoys doing it. The Route 66 Association of Illinois is not merely a “hobby” to Marty, it is his life.

Another real accomplishment to him is the Bob Waldmire bus and van that is on display at the museum. He played a big roll in securing these items, and proudly entertains visitors on tours through Bob’s bus.

He is present at the museum almost every weekend, doing his thing, not because he has to but rather because he WANTS to. He loves the organization and what it stands for.

If I were to stand up here and try to mention everything Marty has done for us, I would be here half the night and you don’t need to hear me run off at the mouth that long.

Marty has brought our organization from “poverty” to “solvency” and has enjoyed doing it, and it was all done as a volunteer. He has not been paid a nickel for his expertise and his efforts. He is witty, energetic,honest in his dealings, steadfast in his love for Route 66. He is constantly talking about Route 66. I am very happy to have worked with him the past 18 years. I only wish he had been with us when the organization started in 1990, we would probably be better off today than we are, which is really not bad.

Many years ago, a man with only a high school education, who started as a Deputy Sheriff in a small Illinois town and rose to be the Director of the State Police and Prison System, said in a lecture one time that “the person who handles the purse strings of the company or organization, RUNS the company or organization. I have found that to be true, and especially so with Marty. We may have Presidents, and Vice-Presidents, but the man with the control of the money “RUNS” things.

Marty is like the song that Toby Keith sings “He’s not as good as he once was, but he is as good once as he ever was.” His parents, “Mother Nature” and “Father Time” are slowing him down. He has been good to us through the years and we owe him far more than we could every pay.

I only wish this plaque was a million dollars, but it isn’t. I know in my heart that it is worth a million dollars to Marty for having received it. I am proud to have worked with him all these years and even more proud to call him my friend.

Thanks for allowing me this honor to present to Marty Blitstein this honor.