Our thanks to Pontiac, Illinois Tourism Director, Ellie Alexander, for the following story:

Jim Jones, one of the guiding personalities behind the Illinois Route 66 Hall of Fame and Museum, was recently recognized by the Route 66 Association of Illinois for his years of service to the preservation, promotion, and history of America’s most famous road, Historic Old Route 66. Mr. Jones was honored with the Route 66 Association’s President’s Award for 2016. In making the award, Route 66 Association President, Cathy Stevanovich noted, “Thru thick and thin and all that has happened, Jim has persevered and [he] has been available as much as he can for us.” Jones was involved at the creation of the Route 66 Hall of Fame and Museum located in Pontiac, Illinois. Since its opening in 2004, Jones and the Route 66 Museum have welcomed hundreds of thousands of visitors from across the globe. His knowledge of the Mother Road and its history has enlightened many, and his stories of growing up on “America’s Main Street” have entertained all who have been lucky enough to hear them. 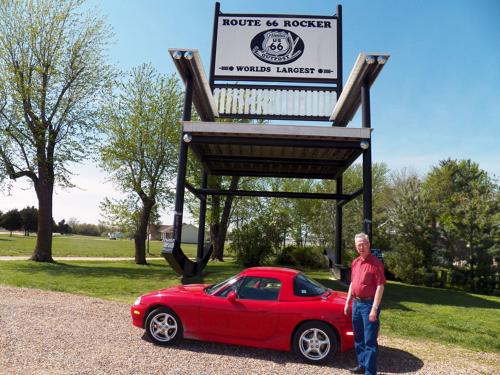 Jim began his association with Route 66 at an early age. His father, Richard Jones, opened a service station along Route 66 in Odell, Illinois in early 1940. Young Jim Jones, aged 8, washed windshields, checked oil levels, pumped gas, swept the garage, and put air in tires for his dad. To make a few pennies in spending money, Jim sold bottle of soda pop to passersby. With that sort of personal history, it seemed a natural development for Jones to end up as one of the leading organizers and historians at the Illinois Route 66 Museum.

With the presentation of the Route 66 Association of Illinois’ President’s Award, Jones joins an elite group of Route 66 supporters that includes such notables as internationally famous artist, Bob Waldmire and Pontiac Tourism founder, Betty Estes. Jones, now in his 80s, continues to stop daily at the Route 66 Museum in Pontiac to chat with visitors and share his love of the Mother Road.