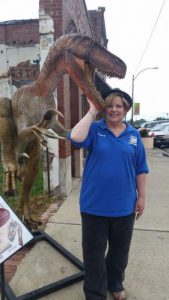 Fall colors have faded and cold winds are moving in and inevitably, snow. It’s time to reflect back on the past year, and to look forward to new endevors and new activities along the Mother Road in 2014. I am always surprised at the number of letters and emails we receive from people who want to come here and “live our lives.” I’ve heard from four different groups of people who came this past year as part of an International bus tour that they are returning this coming spring – on motorcycles!

Pontiac has installed special lights behind the museum for night picture- taking. The Red Carpet Corridor planning is in full swing! Mark your calendars for May 3 and 4 as the 90 miles of fun and 13 communities between Joliet and Towanda are making plans to welcome you back again for their combined Route 66 festivals and extravaganzas.

Plans for the 25th Anniversary Motor Tour, to take place June 13-15, 2014 are underway! Tom Armbruster will be our Grand Marshall and lead us over the Chain of Rocks bridge at the start of our tour. This tour will celebrate the 25 years we’ve been cruising down the road together. We have some great new activities planned and some stops are back by demand because they were so popular on past tours.

I recently attended the World Monument Foundation/American Express Conference on The Mother Road held in California November 20-22. There were 102 attendees from all parts of the Mother Road who gathered to talk about Route 66 and its future. The National Parks Service was also there and helped moderate the discussions and round tables regarding Economic Development and Tourism and helping communities along the road embrace their 66 heritage as a way of surviving tough economic times. Although common goals were developed, a steering committee is being put together to outline what exactly needs to be done. I read online that a faction spent two days putting together a group so that every state “had a voice.” I would like to know who Illinois’ voice is because I will share with you I was not contacted to be a part of that group. On the last day of the conference where attendance was by invitation only and had 50 participants. Illinois had seven representatives: Ellie Alexander, Bob Russell and myself (Pontiac), Bill Kelly and Anne Haacker (Springfield), Bill Thomas (Atlanta), and Jen Hoelzle, Deputy Director of the Illinois Office of Tourism.

I’m proud that in Illinois, we take care of our miles and our projects because we want to! Sure, “We work for food,” as Preservationists but one of the nicest parts of being president of this Association is knowing the real, caring, low-key people who live, work, and serve along the road who are not vested in being icons. People like the unsung heroes who get up at 6:00 and weed the gardens at the park and High School display in Towanda; the owners of small businesses who open up on Sundays as a special favor to accommodate groups and the people along the road themselves who help a lost tourist get back on the road safely.

As we look forward to a new year, the Board of Directors and I wish you all a happy, healthy, and joyous 2014! We wish you warm mittens, a car that starts when it should, and time to reflect on the beauty of snowflakes. Don’t forget to get out and support our business members! Coffee, chicken, chocolate, and pie are not extravagances when purchased on Route 66. It’s an investment in keeping our linear community alive. See you on the road!