Our members-only newsletter, The 66 News is distributed quarterly since its first issue in September, 1989.

From time to time, we’ll share a piece from the magazine here on the website so you can see for yourself the kind of content you can expect in this quality publication. This article is from Summer, 1994. Enjoy!

Editor’s Note –  Stu Kainste lives in Springfield where he’s involved in natural preservation activities. He wrote this reminiscence of 66 at the request of his longtime friend, Bob Waldmire. 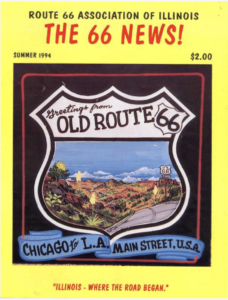 Ultimately all hitchhikers who thumbed 66 were tourists. We lived and breathed the highway’s contours and curves, slept its embankments, drank its acid coffee. Bleached in its relentless sun, soaked in its ill-timed rains, but mostly stayed partly awake through its long stretched that lead to somewhere. It was 1972. I was 21. I had already hitchhiked some of Europe and probably every road in New York State, visiting friends who were sometimes glad to see me. The Catskill/Adirondack trails were my first introduction to nature. Hitching was my prime escape route out of the projects in Brooklyn. I didn’t drive and I wasn’t sure exactly what a motel was. So when I went west, starting at the George Washington Bridge, I was skilled to the ways of the road. In three days I reached my first stopping place – Springfield, Illinois.

On the way, I met a nice fellow in a convertible who took me through Ohio and Indiana. He was going to Yellowstone. If a vacation had been my goal, I would have accompanied him. But the only thing I was sure of was that I didn’t want to return to Brooklyn and not being a bear, well, Yellowstone wasn’t it. Instead I spent a week in Springfield with a friend, then headed west on Route 66 toward the Grand Canyon.

It was the perfect destination. I was stopped repeatedly in Tulsa in Oklahoma City by the law. When they asked me “Where yer’ going?” the Grand Canyon always got me off. In both towns I waited all night under and beside the four-lane until I was rescued the next morning by kindly citizens.

I remember riding with a hard-nosed guy carrying a truckload of watermelons. He stopped off at a watering hole, came back smashed and still drove through the night. He had me along to help put the tarp on if it rained. It did and we got soaked. He shared some cigarettes with me and put me off at a pine forest under the twin peaks near Flagstaff. I woke up with the dear and hitched to the canyon. It was indeed a perfect destination.

At the canyon I met a guy from Pittsburgh who was, like me, getting ready to hike to the Colorado River. He had a bag of fried chicken and some cigarettes. Fortunately for him I had enough camping gear to keep a small regiment alive, so he survived. Fortunately for me, he was driving a VW, going my way, and got me through the worst of Utah’s dry country.

I left 66 for a sojourn through Utah, Idaho, Oregon and the Sierra Nevadas. On the road I met a wide range of fellow freeloaders – short, tall, black, white, hairy, bald, alone, coupled, etc. You could tell the road tested ones by their nonchalance – if they gave a damn, they weren’t telling. When I hit Route 66 again in Needles, I had become one of them. There was no more, “Hi, my name is Stu and I’m from Brooklyn,” stuff. It was a nod and a grunt and a sunburnt glance up the road.

I almost hopped a train in Needles. I’d spent two days roasting in the desert sun. But a ride came along just before the train left. And adventure not done, but no regrets.

On the way back east, I’ll never forget the mesa outside New Mexico. I spent two days there living on milkshakes, waiting for a ride. It was the only break on the horizon. I’ll also never forget the hitchhiker we picked up while I was riding in a VW van. He had a brown paper bag full of cigarettes. We all had some and when we reached the big sky country outside of Amarillo, we saw the largest rainbow possible.

My last ride was with an ex-P.O.W. who was going home after being away for four years. He hadn’t seen his girlfriend yet. The only other things I remember were his questions, “Is Creedence Clearwater still together?” “What’s with all this long hair?” and “Will I see you at the State Fair?” We turned north on Illinois Route 4, still a fine road, and he dropped me off in Jacksonville, thirty miles from Springfield. I got a ride the rest of the way from two youngsters who were on their way to the fair.

I thought I would winter in Springfield and travel the summers away. Twenty years later, I do my traveling in a station wagon, my home is still Springfield and I only see Route 66 in small doses that mostly link subdivisions or suburban communities.

Route 66 was doomed the way our countryside is doomed, the same way our forests are doomed, the same way our lifestyle is doomed. The earth can’t hold the people, just like the old two lane couldn’t handle the volume. While I was traveling a stretch of Old 66 near Funks Grove recently, the adjacent interstate was full of traffic. The old road couldn’t hold it. This old planet can’t hold it. No problem – we’re only tourists.