As part of a series on the influential, colorful, historic people, places and things along Illinois Route 66, we present The Riviera and the Streetcar/Diner.

Route 66 Association of Illinois Hall of Fame Classes of 1994 and 2004, respectively 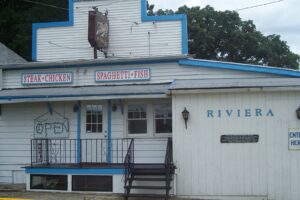 The Riviera stood at the wooded junction of Old 66 and the Mazon River, just northeast of Gardner, IL. It was the first true roadhouse inducted into our Hall of Fame. Building it was the longtime dream of Jim Girot. In 1927, just as Route 66 was being paved through the area, he was able to buy the land. Instead of building from scratch, he bought the payroll office from a coal mine in South Wilmington and a former church in Gardner, moved them to the site and put them together. The result was what was known as the Riviera. The establishment catered to those looking for alcohol and gambling during Prohibition. Slot machines and booze were located in the basement, secured behind an iron door to hide in case of a raid. 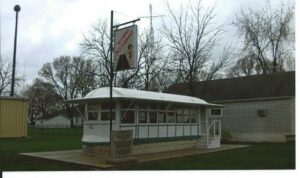 In 1932, a century old horse drawn Streetcar/Diner was added to the backyard of the property. A zoo and gas station were also added to the Riviera’s complex. An early restoration project of our association took on a restoration of the streetcar/diner.

Jim, his wife Rose and their children Irene, Violet, Larry and Lillian moved there in 1928. Members of the family would live there and operated the restaurant until it was sold to Bob and Peggy Kraft in 1973. 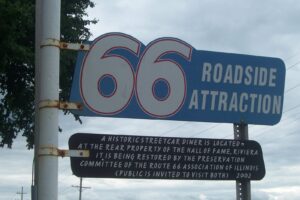 Bob and Peggy were transplants from Chicago. They’d owned two taverns up north and took over the Riviera as a “retirement” job. They continued serving up the Riviera’s long-time menu of steaks, chops and spaghetti. The Krafts didn’t change much else at the Riviera either. In the tradition of German rathskellers, the main restaurant was in the basement. The dumbwaiter between the restaurant and the kitchen upstairs remained a WWI artillery shell. The payroll office safe was used as a cooler. The Krafts operated the Riviera until retiring for real in 2008. 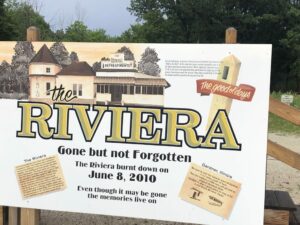 After reopening briefly in 2009-2010, the Riviera closed and its future remained unsettled. Sadly, on June 8, 2010, the Riviera was lost to fire. In 2019, the former location of the Riviera Roadhouse is marked with a simple sign that highlights this once great Route 66 roadie stop.