Sit back and enjoy a Journey Joe travel adventure. Is Journey Joe a real person? Well, not really. But he’s as real as any nickname, any stage personality, any thought or collection of travel experiences that any roadie might have. The real “Joe” is Joe Razumich, a lover of cars and the open road ever since his childhood, growing up around the corner from a hot rod shop, a busy Broadway, and a railroad track. But really all Real Joe does is drive. And put gas in the tank. And put Mr. Suitcase, Mr. Duffle Bag, Ms. Cooler, Mr. Road Atlas, etc., collectively known as the “Inanimate Objects”, in the trunk or behind the passenger seat. Or, to put it another way, Joe loves to drive. Journey Joe loves to write about it – and take you, Dear Reader, along for the ride.

Munger Moss Motel. Missouri. Mother Road. Marla. Oops I promised not to call her  that. It won’t happen again.

Welcome to the next great Journey Joe adventure: A pilgrimage down Route 66 to  Rolla, Missouri for the 75th anniversary of the iconic Munger Moss Motel. Journey Joe  has been invited to the party and he was not to be denied. Angel the Corvette was  more 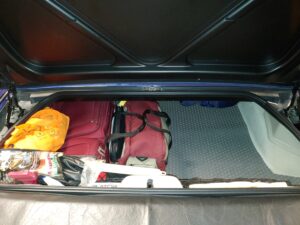 than ready for the trip; she hasn’t been on Route 66 since 2018. “Vagabond’s  been having all the fun lately” lamented the feisty gal of my six-speed dreams. And so it  was, that the familiar passel of inanimate objects made their way into the garage and  into Angel’s spacious storage locker. Well, not all of the objects. It is June, after all. So  Mr. Space Heater will sit this one out.

So there’s some extra room for a change. What better opportunity for a new twist on  the familiar adventure? The “Twist” came in the form of a request from a friend of a  friend. One of my Facebook friends from a Route 66 group, Lulu, contacted me for a  ride to Missouri. Lulu’s expected ride cancelled out, and she’s already bought and paid  for her room at the Munger Moss Motel, for the celebration. I mulled it over in my head  …

“Taking a virtual stranger along with you, for a whole week, down Route 66. Are you  crazy?”

“Yes! Yes you are crazy!” retorted the Journey Joe voice. “It’s Route 66, the road where Magic was born. We got the means, so let’s share that magic with someone else  who loves Route 66 as much as we do.” And so I told Lulu (who I knew previously as  Marla), “Sure, if you can get in and out of a Corvette, you’re in the passenger seat!”

“That’s what my friends said to me”, recounted Lulu, “when I told them I just hitched a  ride with a Facebook friend, to head down Route 66 to Missouri in a Corvette!”

I picked up Lulu at her apartment right on time, at 3:00 this Tuesday afternoon. Our first  stop will be the Braidwood Motel in Braidwood, Illinois, where we will launch our Route  66 exploration to Missouri.

Well, so we’re both crazy, aren’t we. That certainly evens up the score. I got a good  inside laugh when Lulu was telling me about her friend’s exclamation, which was  exactly the same thing I had thought to myself.

Today was perfect top-down weather. Clear blue sky, low 80’s, low humidity. And it  aint gonna last, so we bobbed and weaved our merry way westbound through Indiana,  avoiding road closures to cross the state line to Illinois, then on county roads through

Illinois backcountry, narrowly avoiding Kankakee and then cruising up along the Kank  River up to Braidwood. Check-in was a breeze, and for the fifth time in my travel  career, a room at the Braidwood Motel is immaculately fit for purpose. I’m in room 12,  and Lulu is in room 10. The televisions work, the AC units work, and there’s plenty of  bathroom tissue in each room. Lulu retired early, and I took Angel out for a tank-up and  car wash.

The car wash tried to scam me. I put in seven quarters, and after that, it rejected twelve  quarters before accepting one more. Hah, the scam didn’t work. I got the bugs cleaned  off of the Angel-Vette, and thus ended this most delightful day.

Follow along with Journey Joe’s travels! Click to read the following entries in this series as they’re published.