Route 66 Association of Illinois Hall of Fame Class of 2017 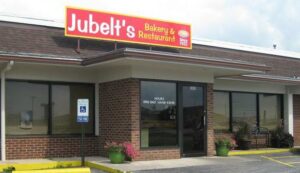 In May of 1922, three brothers, Paul, Fred and Albert Jubelt bought an existing bakery in the coal mining community of Mount Olive, Illinois. Bread was by far the most important product of the bakery. The brothers worked hard and were successful. In 1929, Albert died and Fred opened a second bakery in Granite City. In 1935, the partnership dissolved and Paul continued to operate the Mount Olive location himself.

As more highways were built in the 1930s, competition from national bread companies increased. A house to house route was started with great success but World War II and shortages of material and manpower ended this effort, In 1950, with the general decline in coal mining in the area, Jubelt’s expanded with another store in Taylorville, Illinois. Another store opened in downtown Litchfield in 1952. Over the next 40 years, more stores were opened in Jerseyville, Lincoln, Carlinville, Staunton, Gillespie and Springfield. In order to meet customer demand, the family again changed direction, adding prepackaged vending-type sandwiches in the Litchfield store. After some sessions in the test kitchen at Bunn Capital, lunches offering freshly made sandwiches, salads and soups were available in all their stores.

As the business in Litchfield began to shift to the west side of town, the family needed to find a bigger place with parking. When the Burger Chef Building on Route 55 became available, the family decided to open the current restaurant there in 1982. The economy once again changed and the family independent bakery became a dying breed. The family began closing the stores. The decision to keep only the Litchfield location open was made and in January 2008, Jeanmarie Jubelt purchased the business – this was the 86th year of Jubelt’s being in business. Over the last 90+ years, Jubelt’s has changed direction many times in order to adjust to the changing times and lifestyles. With the hep of loyal customers and travelers from around the world, Jubelt’s Bakery and Restaurant. is now in their 10th decade. Hand-dipped milkshakes are still served with a smile!