Route 66 Association of Illinois Hall of Fame Class of 1998

America once had 4,000 drive-in theaters, 33 of which were on Route 66. Nationally, there are less than 500 drive-ins left today. On Route 66 there are only five. The longest-lived of them is the Sky View Drive-in in Litchfield, Illinois.

Friscina, a regional theater chain, opened the Sky View in 1949. Its 16-acre lot holds 600 cars. At the time of its induction to our Hall of Fame, the theater’s owner was Norman Paul, who bought it in 1982.

The decline of drive-in theaters’ popularity had many reasons throughout the years: Television, rising land values, smaller cars, VCRs and even Daylight Savings Time. Yet the Sky View thrived through it all. When the Sky View became a Hall of Famer, some 300-400 people regularly attended weeknight showings and more than a thousand on weekends. Paul attributed this to good advertising, family-worthy movies, and the $1 admission price. He also saluted his loyal staff… all four regulars had been with the Sky View for more than 20 years. 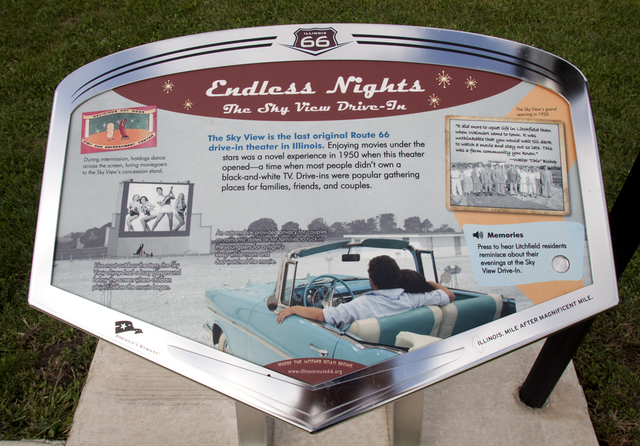 Current owners Nick, Mindy, Mike and Debbie Pastrovich purchased the drive-in in 2016, modernizing the name to SkyView. As of this writing, they have put the theater on the market, stating they are “looking for new caretakers” of the property The Pastrivichs credit the locals and Route 66 enthusiasts for their successes. In the following video, the Pastrivichs explain their hopes for the new owners of this iconic landmark. (Shout out to Ron at Route 66 News for making us aware of this video so we could share it with you.)

The family declares, “The Mother Road has such a rich history, and is loaded with fun things to do, and of course amazing foods to try!”