Route 66 Association of Illinois Hall of Fame Class of 1992 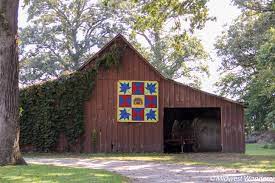 Fifteen miles south of Bloomington on Old 66, a natural maple grove interrupts the Illinois prairie. Isaac Funk emigrated from  Germany and homesteaded the grove more than 140 years ago. Steve and Glaida Funk, the current proprietors, are the sixth generation of Isaac’s family to manage the grove. Their children and grandchildren also work at the grove, making it one of Route 66’s longest-running family traditions. They even tap some of the same trees that Isaac did!

When Steve and Glaida took over the grove, it was running only 500 buckets. But the new trustees studied their art and began trying out new scientific ways of collecting and boiling the sap. At their height, they were running nearly 5000 buckets and their sirup – which they spell that way because it has no added sugar was pouring all over the country via Route 66.

In the late 1970s, Steve and his son Mike formed a partnership. In 1988, Steve retired, and Mike and his wife, Debby, took over the business. This same year, Steve, Mike, and Mike’s brothers, Larry and Adam, built the sugarhouse that is used today. 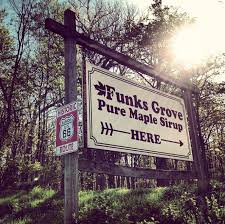 The Funks also made a career out of helping travelers in distress. One time, Steve drove an injured soldier and his wife all the way to Chicago after their car overturned. On another occasion, he loaned his car to a stranded student who had to hurry to nearby Illinois State University for an important test. And Glaida can’t count all the people that they’ve pulled out of ditches or gassed up. Paraphrasing a favorite poem, she says, “We just want to live in a house by the side of the road and be a friend to man.”

In 2001, Mike and Debby’s nephew Sean Funk became a partner, and their son, Jonathan, joined the partnership in 2014. They currently draw sap from about 6,000 taps, including 3,500 tubing taps, and produce an average of 2,000 gallons of sirup each season. In recent years, Funks Grove Maple Sirup has expanded its line of merchandise to include maple cream, cookbooks, and Route 66 memorabilia. They have also added a mail order system, through which they provide customers all over the country, and world, with their delectable maple sirup.