The World’s Largest Catsup Bottle – Since 1949

Route 66 Association of Illinois Hall of Fame Class of 2008 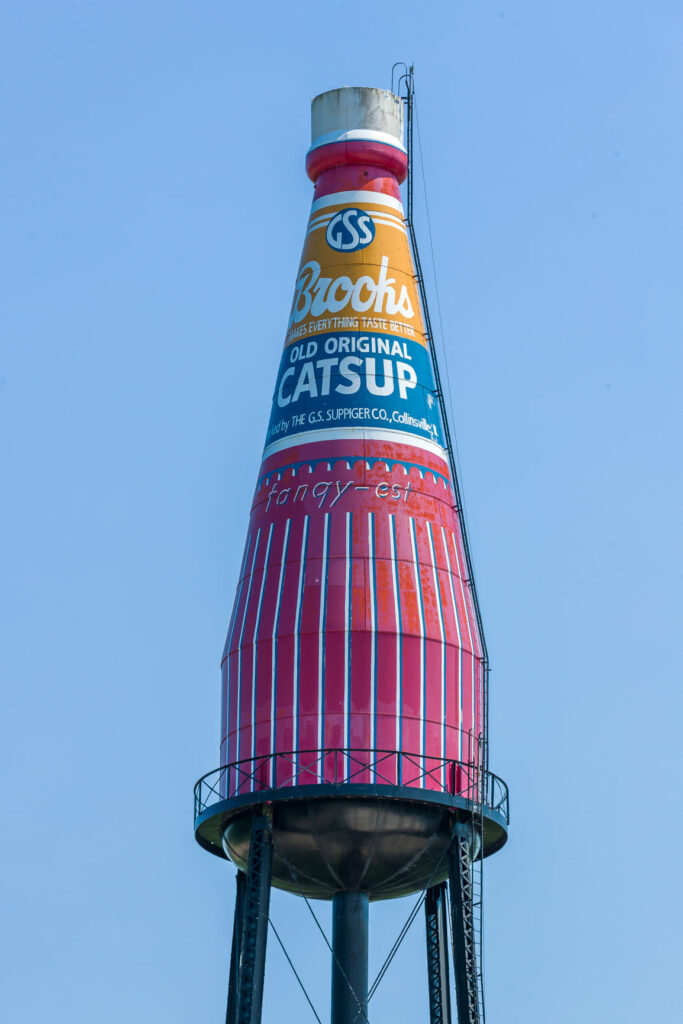 Businessmen raised $5,000 and created the Collinsville Canning and packing Co. The plant struggled and went through a few different owners/operators until 1908 when the Brooks brothers took over. They operated under the name of Triumph Catsup and Pickle Company. In . In 1920, the brothers sold out to American Cone and Pretzel Company, and in 1933, the G.S. Suppiger Company purchased the plant. The catsup factory had great success in those years, surviving the Great Depression and growing by leaps and bounds through the 1940s. They retained the Brooks label because it had acquired such an excellent reputation. After World War II, a fire protection sprinkler system needed to be installed throughout the plant. Since the plant already put a strain on the City of Collinsville’s water pressure, it was decided to build a new water tower for plant operations. The president of the company suggested the water tower should be built in the distinctive tapered shape of one of their catsup bottles, amusing everyone.

In 1947, W.E. Caldwell Tank Company of Louisville, KY, entered a contract to build this unique water tower. Final drawings for a 70-foot tall bottle atop 100-foot steel legs was approved. In October of 1949 the tower was in place, holding 100,00 gallons of water. By the early 1960s the plant was closed. The water tower was empty and the plant was used as a warehouse. After years of neglect, the rusted, timeworn tower seemed destined for demolition and the parent company decided to sell the property.

Larry and Jim Eckert of Bethel Eckert Enterprises purchased the factory site along with the Catsup bottle in June of 1994. A 14-member Preservation Group was formed to do what needed to be done to preserve the landmark. An engineering study to repair and repaint the structure was reviewed. The group began fund-raising events and raised over $100,000 for the project. By 1995 the completely restored red, white and blue landmark was unveiled to the public. In 1999, the 50th anniversary of the catsup bottle, a new logo was produced for memorabilia to be sold. In 2002, the World’s Largest Brooks Catsup Bottle was named to the National Register of Historic Places.

And in 2008, The World’s Largest (Brooks) Catsup Bottle was inducted to our Association’s Hall of Fame.