Written and submitted by Keith A. Sculle

Many are the Route 66 travelers that Herman Goddard served at his garage — an estimated sixty to sixty-five percent of his market before Interstate 55 bypassed The Mother Road. His garage is located two blocks west of Route 66 and has displayed Route 66 shields on its facade above the garage doors for eight to ten years years. I interviewed Herman Goddard about his business in 2015 and 2016. 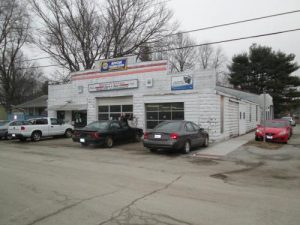 “Hmm, how long have I been at this garage business?” Herman Goddard puzzled near the end of my 2015 interview. From 1961 to 2015 — fifty-four years we calculated as we sat in his office nestled in the corner of Herman’s Garage, now a body shop, small parts repair, and truck rental. The garage sits a block off the square in small town Divernon, Illinois (population about 1200 in 2010), separated from the railroad and is rich in local lore.

Opened as a building for a Ford dealership in 1917, a special drain for washing Model Ts still scores the concrete floor near the back of the garage. And, it is remembered all too sorrowfully for the death of one of the brothers who owned the garage in 1932; having kissed his wife, started to drive back to work and was killed by an oncoming train at the intersection just outside his garage. Typical of the flexibility in small town commerce, the garage served outside traffic on nearby Route 66, and an early set of owners pumped gasoline outside the garage, ran a repair shop inside, and a trucking business besides. A set of later owners operated there until 1983 when Herman took over. His claim for the 1961 start actually refers to the year he began in the business as an adjunct to his father’s farm outside Divernon, having adapted a building as a garage.

Herman had initially learned engine repair working on his father’s vehicles and, after ending his service in the Navy, went to school. He rapidly abandoned training for tool and die work, saying that it was too boring and required waiting around for the next job. That’s when he got educated in body work at the Greer School in Chicago. (Coincidentally, he lived only a few blocks from Route 66 when he went to school in Chicago.) During the 1950s he did body work for auto dealers in nearby towns. Herman’s son David, born in 1962, owns the garage now and operates it with one full-time employee and some spare help from his father between eight and noon daily.

Adaptability has been the hallmark of commercial success. When farming began to require increased acreage, Herman turned full time to garage work. When automobiles required less frequent engine repair (since the 1980s), Herman turned exclusively to body work and 24-hour towing. Until two years ago, Herman went towing by himself. He loves his work dependent on transportation.

Through the years he remained a active presence in his community; some families have given him business for three generations. He pointed out that one dedicated customer, formerly of Divernon, now comes from as far away as Peoria. On one visit with Herman, I myself met three former residents who traveled from Greenview, 29 miles away, for their auto repairs.

Each morning a remarkable impromptu social gathering convenes around the coffee pot just inside the office door. Customers pass through on business but seated in chairs with their names marked on them are the “regulars.” The weather, local events and news (each has identified himself as a Democrat or Republican) are discussed. Herman has learned first hand about the community around him and the long history of his building. He’s eighty-eight years old, having been born in 1928.

What a remarkable snapshot in time does Herman Goddard present and the character of his business because of him!