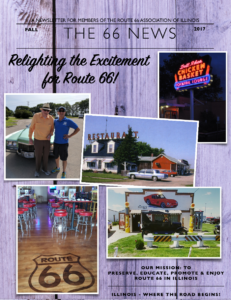 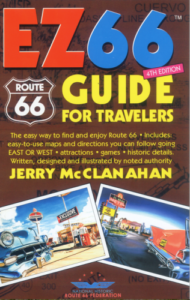 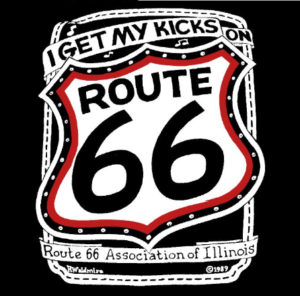 Now all sizes only

Mail size selections with your (printed) name and address along with a check to: 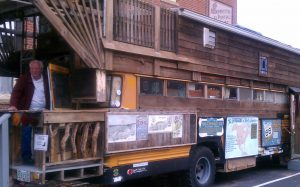 All profits from the sale of these shirts go toward preservation of Bob Waldmire’s converted school bus, a mini Route 66 museum in its own right. See it on display behind our Hall of Fame and Museum, located at 110 W Howard St, Pontiac, IL. 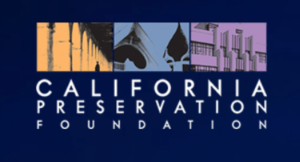 Our president, Cathie Stevanovich, wants to make everyone aware the the Historic Tax Credit is being threatened! Click here to learn how you can help.

On 8/24/17, the Route 66 Corridor Preservation Program, which is administered by the National Park Service, National Trails Intermountain Region, notified the Tropics Neon Sign Project Committee it had been awarded a $17,000 grant. The cost-share grant program provides grant assistance for eligible historic preservation, research, oral history, interpretative, and educational projects. Grants are offered through an annual, competitive grant cycle. Since 2001, 139 projects have been awarded $2.1 million with $3.4 million in cost-share match, totaling $5.5 million in public-private investment toward the revitalization of the Route 66 corridor.

The Tropics restaurant was opened in 1950 by Vince Schwenoha in Lincoln, Illinois. Vince served in Hawaii during his WWII tour of duty, which was the inspiration for the name of his new business. The site included a large, signature neon sign that quickly became the symbol of the restaurant and a Route 66 landmark. In 1955 Lew Johnson became manager of the Tropics. Under the leadership of Lew and his wife, Bev, it operated successfully as a family- run business for the next five decades, attracting customers from far and wide. In 2016, the Tropics was inducted into the Route 66 Association of Illinois Hall of Fame.

After sitting vacant for ten years, the property was purchased for the construction of a new McDonalds restaurant. While the building could not be saved, a public/private partnership was put in place between the City of Lincoln, the Logan County Tourism Bureau, and the Johnson Family to preserve and restore the iconic Tropics neon sign. Thanks to the NPS grant and other funds raised to date, the Tropics sign will be restored to operating condition to honor the history of this well known Rt. 66 restaurant. Included in the project design is an interpretive panel that will tell the story of the Tropics so visitors can learn about the history of the restaurant, its relationship to Route 66, and the long-time involvement of the Johnson family. In addition to preserving an important piece of Lincoln and Logan County’s Rt. 66 history, the restored Tropics sign will be used to promote and market other Rt. 66 related attractions in Lincoln.

To date, approximately $60,000 of the total $70,000 needed to complete the Tropics neon sign project has been raised. The opportunity is still available for donors wishing to contribute to the project. “TLC Champion” donors, [$1,000 or more] will be recognized on the interpretive panel installed by the restored Tropics sign. “TLC Partner” donors [$500 or more donation] will be recognized on pavers placed around the base of the sign. “TLC Benefactor” donors [$250 or more donation] will be recognized via a brick installed at the base of the sign. Donation information is available from the Logan County Tourism Bureau, 217-732-8687.

You can bet that we’re already planning Motor Tour 2018!

Watch here for updates as details are confirmed and the dates draw nearer. 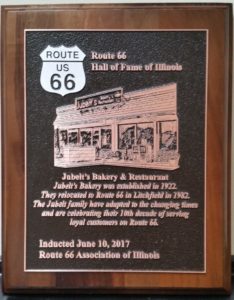 We’d like to extend our congratulations to Jubelt’s Bakery and Restaurant in Lichfield, Illinois on an auspicious occasion. The business is celebrating turning 95 this weekend!

Route 66 News posted a great story about the business’ history and planned festivities.

Read our account of the business upon becoming a 2017 inductee to our Association’s Hall of Fame.

Tully Garrett and Holly Barker have officially purchased the Gemini Giant/Launching Pad as of October 17, 2017. The famous muffler man statue and drive-in restaurant will remain at their original location at 810 East Baltimore Street (Route 66) in Wilmington, Illinois. They will be introduced by Cory Jobe, Director at Illinois Office of Tourism, after his keynote address that kicks off the Route 66 Miles of Possibility Conference in Joliet.

Jobe’s address is at 9am on Friday, October 20th, followed at 9:30am by a press conference with owners Tully Garrett and Holly Barker. An official from the City of Wilmington will also be on-hand. The restaurant dates to 1960 under the original name of Dairy Delite, and in 1965 was renamed Launching Pad, becoming home to the Gemini Giant, a fiberglass “Muffler Man” sporting a space helmet and rocket ship. It is a remnant of our fascination with space travel in the 1960s.

New owners Tully Garrett and Holly Barker describe themselves as “second-chance soulmates.” They both lost their spouses to cancer in the last several years. “We were both living the American dream and we both had our lives crash in on us due to the loss of our spouses,” said Barker. According to Barker, Garrett owns an insurance agency that has been in his family for 55 years. Tully was also in the music industry, and his extensive music memorabilia collection will be on display at the Launching Pad in a mini-museum. Tully has a real affinity to classic cars and car shows and he plans on hosting car shows at the Launching Pad and wants to partner with local business owners to help bring in the community to make this a huge success.

Barker started working in restaurants the day she turned 16 and continued to work through high school to afford a trip to England and thus her love for travel adventure was born. She is “so excited to embrace the travel and tourism industry here in Illinois.” Holly describes herself as a world traveler having lived in three different countries and travelled extensively.

Barker has worked at a broad spectrum of restaurants, including a BBQ restaurant in North Carolina where she is from, all the way to fine dining establishments. She earned a minor in Food Service Management with a BS degree in Health Promotion from Appalachian State University in Boone, NC. Her first job out of college was working for PYA Monarch Food Service Distribution which later became US Food Service. She left the food service industry in 1998 to join the pharmaceutical industry where she worked for Abbott Laboratories with its home base close to Chicago.

Holly retired from the industry in 2015 after her husband passed away from cancer in 2014 and moved home to establish Grief Anonymous and the Grief Resource Network for grieving people in crisis. Grief Anonymous, is an online grief support organization with 70K+ membership with 60 online volunteer administrators and a Facebook page that has a million views a month and is growing rapidly. According to Barker, Holly and Tully met in one such online group for widowers and widows. They became instant online friends for months, and later when they met in person, “the two fell instantly in love.”

Holly says the purchasing of the Gemini Giant/Launching Pad “offers them a genuine opportunity for personal happiness. Tully gets his car shows and music and to eat great food…Holly gets her back room for community events and the opportunity to meet people within her network…the opportunity through her kitchen to create what the town of Wilmington longs for as well as a new business model for restaurants where everyone shares in the success.”

With the Grief Resource Network, Holly plans on bringing her skills to the Launching Pad and helping with the homeless crisis in Chicago, utilizing the food trucks and a percentage of the restaurant’s profits to aid in her cause to feed the hungry. The organization will house itself in the back of the Launching Pad. The front of the building will provide “the full experience of historical nostalgia and the great food and experience everyone is hoping for,” said Barker. “The restoration of the Launching Pad to its original glory and intent is paramount, with the added new benefits of our community projects.

We will be starting renovations on the exterior of the building and then moving in phases on the inside of the building during the winter months. We hope to be ready by late spring of 2018.” However, Garrett explained that they bought the building “as is” and do not have knowledge yet of the extensive repairs that are needed due to the building staying vacant for five years. “What is there now is ‘pot luck’ as to what works and what doesn’t in terms of the kitchen equipment, freezers, HVAC, and electrical so to project what we can do and when can do it will be better described as we know what we have to repair. We will build our cash flow through food trucks and merchandise sales that will then be reinvested into the renovations.

In essence, the town and visitors will have a hand at ‘Operation Launch the Pad’. said Tully. “This is fantastic news for Wilmington and the annual Route 66 Red Carpet Corridor event that includes the community,” said Debyjo Ericksen, Route 66 Miles of Possibility conference organizer. “We are excited to have Cory Jobe introduce the owners at the press conference on Friday.”

“The Gemini Giant is one of the top five Route 66 attractions in the state,” said Bill Kelly, Executive Director of the Illinois Route 66 Scenic Byway. “We are glad to see it remain in Wilmington and get the attention it deserves from the new owners. The Byway wishes them the best of success.”

To register for the Route 66 Miles of Possibility Conference, please visit route66milesofpossibility.com. For more information on the Gemini Giant/Launching Pad, visit www.facebook.com/thelaunchingpadroute66.